As has been the case in the last many years, the Chair Person of the San Diego County Democratic Party addressed club members at their first monthly meeting of the New Year. In 2016, Francine Busby plays that role and she presented her vision for this exciting election year at the January meeting.

First Francine gave a summary of 2015’s accomplishments, which focused on building up the infrastructure, fund raising and recruiting and training candidates. Over 100 candidates attended special campaign training. Additionally a new media campaign focused on building relationships with local media outlets so that they are prepared to receive and communicate the various press releases distributed throughout the year. “Reporters are now picking up our stories and we’re hearing our messaging repeated by reporters” Francine explained. 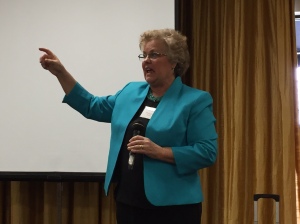 There is much to look forward to in 2016, but also much work to be done to ensure success. Presidential election years also increase voter turnout, which will help boost down ballot candidates. Key elections throughout the county should result in holding or picking up a few new seats on various city councils. There will also be a multitude of ballot initiatives, including one within the city of San Diego, to increase the minimum wage.

Much of this success however will depend not only on voter turnout, but on volunteer efforts to get out the vote. Organizationally then, Francine explained that the goal is to have more than 700 GO team volunteers out knocking on doors and phone banking, at times working in coordination with specific campaigns. There are plans to send personalized Democratic slate mail to 500,000 Democratic voter households.

So how can you get involved to help ensure our Party’s success in the 2016 elections? There are many ways, beginning with the easiest: signing up to receive the monthly “Blue View” newsletter and action alerts. Beyond that, you can donate money or help fund raise, join a GO team and help phone bank or door knock, help to register voters at various events, or even become a delegate to the national DNC! With approximately 33 Democratic and affinity clubs in the county, you can also join other clubs of interest. A complete list of existing clubs can be found on the party website.

JOIN OUR NEXT MEETING FEBRUARY 12 1-3PM

San Marcos Dems will host Brian Lane, Senior Regional Planner for San Diego Association of Governments (SANDAG). Brian first became involved with public transit as a consultant 22 years ago, transitioning to SANDAG in 2005 to work on short-range transit and specialized transportation planning. Brian’s group works on the biennial update to the region’s Short-Range Transit & Coordinated Plan, conducts TDA performance monitoring, Title VI fare analyses and Program Updates, Specialized Transportation Program, and oversees the region’s passenger counting program. Most recently, Brian has been the co-lead for the Transit Leap strategy for the 2021 Regional Plan’s 5 Big Moves, and is leading the effort to implement some of the transit concepts in the Regional Plan, including a pilot to provide free fares to youth, and a study to implement 3 new Rapid routes.

Brian will focus his presentation on SANDAG’s Regional Transportation Plan, and projects in North County. There will be time for Q & A after the presentation.

The meeting is open to all. To attend log on to www.bit.ly/smddcmeeting