The July 8th Lake San Marcos Democratic Club meeting was one of the most meaningful and exciting events to have come along. While all our meetings try to be informative, this one exceeded expectations as all six of the candidates running to defeat Rep. Duncan Hunter of the 50th district in 2018 were present. The packed room was eager to learn what each candidate believed and what they hoped to accomplish. All are very strong candidates and are passionate about how they see the current administration and the dire need to reverse course and return our government to the people. High on everyone’s list – both for the candidates and the audience — was Climate Change, Healthcare for all (5 of the 6 support Single Payer Health Insurance while the sixth felt changes could be made to ACA to make it workable), Russian Hacking Threat, Healing the Rift in the Party, and giving citizens hope again.

Questions from the audience that they wrote on index cards were picked up and taken to a table where Mary Borevitz and Kathy Steel sat sorting them. They found the most common threads people brought up, collated and combined the questions, and passed them on to Avi Karnik, our vice president, who asked the candidates for their responses.

Each candidate had two minutes to introduce themselves and make an opening statement. If they finished within their time limit, Avi told them they would earn a piece of candy. They would be given 1 minute to answer a question, and that, too, would be rewarded with candy. The candidates displayed their sense of humor by bragging if they had earned a jelly bean when they finished on time. It was all in good fun and added levity to the serious subjects being discussed.

Avi began by asking the one question that been given to the candidates in advance:

QUESTION: “We are still a District of 45% registered Republicans, with the remaining being either Democrat or Decline to State. How will you win?”

Josh Butner answered first. “The Democratic Party now believes our District 50 is in play. They will help with guidance and $$ to create a strong campaign. We especially need to target young Democrats who need to feel involved.”

Ammar Campa-Najjar followed: “I’m part Palestinian and part Hispanic but it’s not about me. I listen to these constituents and empathize with their concerns. We need to turn out the young and minorities, 35% are Latino, and I know how to organize.”

Gloria Chadwick continued: “I am a psychiatric nurse and Congress needs me! We must turn out the vote. If everyone registers 2 people, we’ll win.”

Next, Glenn Jensen stated, “There’s a lot of fear and confusion. If we can frame our message around National Security with ways for people to feel secure and safe, we will attract the independents.”

Patrick Malloy offered, “There are over 269,000 people in our district that are on subsidized healthcare. We must fight to allow them to keep their coverage and explain what they will lose if they don’t vote Democratic.” He also has a plan to create jobs.

And lastly, Pete Beauregard concluded, “The Democratic Party has lost sight of our values and freedom. There are too many corporate and neocon Democrats leading the party. We need to return to the people and our values. Country over Party!”

FURTHER STATEMENTS MADE BY CANDIDATES DURING THE COURSE OF THE DISCUSSION: 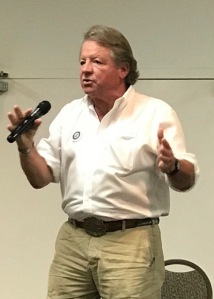 Pete (Pierre) Beauregard – He was a Bernie supporter, and like Bernie, wants to appeal to those in the middle who have lost hope. As a Vietnam vet, he witnessed the war machine up close and saw its carnage. He worked for big Pharma and discovered how corrupt it is and thus believes in Medicare for all. The most urgent issue is Climate Change. He was the first in San Diego County to build a totally passive house, and uses permaculture methods at his ranch. He walks the walk to save the planet. As a Progressive, he can’t be bought off. Pierre feels corporate Democrats have corrupted our values and that we need to return to them. Russian hacking is real but must get beyond party B.S. and focus on peace, climate change, and healthcare. Keep our eye on the ball, not distractions. 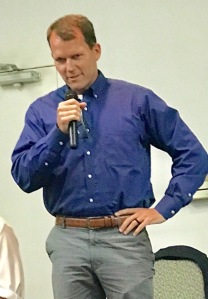 Josh Butner – A former Navy Seal who served 23 years, he worked his way up to become a leader, dealing with national security, education, and military business. With the $$$ awarded to the oil industry to keep them profitable, that money could be used to create passive energy. The U.S. needs to remain in the Paris Agreement to continue their world leadership. He wanted Russian hacking investigated from the beginning. When certain jobs become obsolete, people need to be given educational retraining to remain in the job market. One such program: “Steam:” Science, Technology, Energy, Art, Math. He believes critical thinking needs to be taught, and currently serves on Jamul Dulzura School Board in a Republican District. 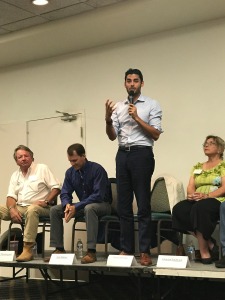 Ammar Campa-Najjar — He served as a field organizer in Obama’s campaign. He worked in the Executive Office, reading, reviewing and passing on letters from citizens who wrote to Obama. He knows how the levers of government work. His whole life has been service, a life long duty. He was asked to make donor calls for his campaign but refused for he believes all his time needs to be spent listening and being with citizens in every neighborhood. He believes Climate Change is the critical issue and that the next generation gets it. He would cut in half R & D tax credits to pharmaceuticals and lower Medicare eligibility age to 50 while working toward Single Payer. Let’s build the workforce instead of a wall. “Don’t need a Hunter, we need a gatherer.” We can create a campaign of unity. 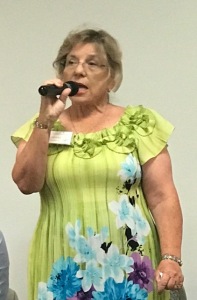 Gloria Chadwick — Confronted Hunter at his one and only Town Meeting. Having volunteered in the Gore campaign, she has first hand knowledge of our institutional history to avoid pitfalls. She’s been elected to the Board of the Grossmont Healthcare District as its President five times in a Red District. She played a leading role in creating the District’s first Co-Generation energy plant which cut the hospitals’ energy usage and saves taxpayers $180,000 a month. As a psych nurse she knows how to listen. “I’m always up for a challenge and believe in health care for all.” We must also have faith in our Intelligence community. She believes people fall in love with their preferred candidate but believes whoever wins the primary, we all must get behind that person and elect them. 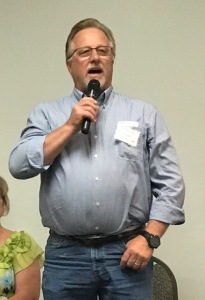 Glenn Jensen — Is running because Hunter is corrupt. He has lived his entire life in the District and was once a Republican. As a degreed economist, he believes a worker’s healthcare must follow them from job to job, as in having “job lock,” and is fiscally responsible. He experienced pre-existing conditions and believes totally in a Single Payer system. “Our form of government is under assault. Cyber terrorism is our most clear and present danger. We already have the tools and need to invest more in technology.” This is a revolution that can start right here in our 50th District. All can be part of this revolution and all who join are united by the same values. He cannot be bought. He would get $$ out of politics starting with not allowing any corporate sponsors. 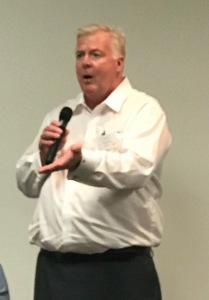 Patrick Malloy — He came within 13.5 points of Hunter when he ran in the last election. Feels the middle class needs a champion so he would vote in favor of Single Payer Health Care to include Dental and Vision care, and would preserve Social Security; he opposes any privatization. Hacking is real, thus we need cyber security. Without it, he feels it would make voters apathetic. One simple remedy for one security risk would be to bury our telephone lines and eliminate telephone polls. He voted for Bernie in the Primary and Hillary in the General. “We need to end the blame game for Hillary not winning and find solutions to issues that will resonate with voters.” Suggests creating a 401K to be used for down payments on homes so the American dream can be a reality.

The Club Vice President, Avi Karnik, did a tremendous job facilitating the discussion and controlled the pace of the exchange so every candidate had the opportunity to speak. It was not a debate. In fact, the entire six candidates were almost in complete agreement on issues. In addition to being knowledgeable, the audience heard some of the candidates’ policy ideas to solve issues. Since their stands are quite similar, voting in the Primary will need to come down to who we think has the best possibility of winning, along with their likability quotient. 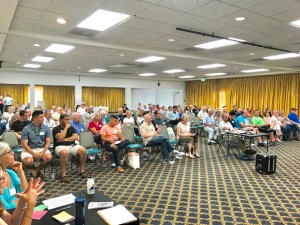 After the two hour meeting when almost all of the 120 people in attendance remained to the end, the candidates gave their closing statements. The meeting ended with a standing ovation for the candidates and the candidates applauding their audience’s respectful engagement. We all left uplifted by the caliber of the candidates and optimistic that our government will improve, beginning with our local District 50.

Leave a comment or ask a question. Cancel reply

We are a chartered club of the